We use different variables to track and analyze equatorial wave activity.

Outgoing Longwave Radiation (OLR): OLR is the easiest way to track the convective components of convectively coupled equatorial waves (CCEWs). OLR is a measure of the outgoing longwave radiation at the top of the atmosphere (W/m^2) and can be used as a proxy for large areas of cloudiness/convection in the tropics. It should be interpreted in a large-scale sense. There is no guarantee that rain exists underneath areas where OLR values indicate convection. Negative (low) OLR anomalies/values are proxies for active convection and positive (high) OLR anomalies/values are proxies for suppressed convection because clouds reduce the amount of longwave radiation that escapes.

Zonal Wind: zonal wind is a good way to track the dynamic structures of CCEWs. Recall that many of the waves, such as the MJO and Kelvin waves, have strong easterly (ahead) and westerly (behind) phases.

Velocity Potential velocity potential is a large scale field which is a broad measure of divergence. (The divergent [irrotational] wind is equal to the gradient of the velocity potential.) Since this is an integral of the divergent wind, it is a smoother field than the divergent wind, or simply divergence, itself. Areas of upper level divergence can be associated with the active convective areas of CCEWs and areas of upper level convergence can be associated with the suppresed convective parts of CCEWs. Note that velocity potential can make CCEWs appear to be more planetary scale in nature than they actually are – and this problem is worse for low wavenumber (longer) waves. People often consider a strong MJO as creating a planetary Wave-1 structure.

It is very difficult to filter data in real time because Fourier decomposition requires information about the entire dataset to properly fit a wave. To better understand this, look at the picture below. There is a timeseries where “now” is the big black dot. The red and green lines are two different possibilities (there are an infinite number of possibilities) of what the future might look like. If you were to try to fit a sine wave to these data, you’d have a problem! How do you know how to fit the area after the dot? What happens after the dot will affect the shape of the wave that is fit in the days right before the dot. This is a problem.

My website gets around this problem by not filtering real time data at all. I use a variation of Paul Roundy’s real time projection algorithm. In an overly simplified sense, here's how it works. Imagine a Kelvin wave. This algorithm takes the current data and looks at how well it matches the structure of Kelvin waves in the past. The closer it matches, the higher the amplitude of the Kelvin wave shown in the plots.

My hovmollers and horizontal maps have different modes that can be overlayed to help you diagnose where certain equatorial waves are at a given time. In addition to the MJO, Kelvin, and ER waves which have been mentioned here, I also have a low pass filter. This is low frequency (>100 day) filter that does a good job tracking convection associated with ENSO. Low frequency convection shifts east and west depending on the state of the ocean below it. To first order (and I stress, this really is only a first order approach), areas of active low frequency convection imply areas of anomalously positive SSTs, and vice-versa.

Imagine that the Earth is covered in only a layer of water with a homogeneous density under hydrostatic balance. Let’s assume that the Coriolis force varies linearly (still zero at the Equator) instead of sinusoidally. Let’s call the depth of the water the equivalent depth. When the momentum equations are simplified to fit this ideal scenario and solved, an important set of solutions comes out which we call equatorial waves.

Although the real world is very different from the ideal world of shallow water theory, it is a decent approximation in the tropics and we see examples of equatorial waves all around us. Keep in mind that although I will talk only about the atmosphere here, these same wave modes can exist in the ocean as well.

The Kelvin wave is the simplest solution to the shallow water equations because it does not have a meridional wind component.

Special Properties: no meridional wind, must be trapped by something. In the real world Kelvin waves can be trapped by coastlines, mountains, or the equator.

Propagation Characteristics: Equatorially trapped convectively coupled Kelvin waves (the kind that we usually talk about) travel eastward at phase speeds of 15-20 m/s over the West Pacific and 12-15 m/s over the Indian Ocean because they tend to be more strongly coupled to convection. They are non-dispersive, so their group speed is equal to their phase speed.

Horizontal Structure (see figure): Kelvin waves have their strongest zonal wind parallel to the equator which tapers off following a Gaussian function off the equator. They have a classic “in, up and out” structure with easterlies in front and westerlies in back. The area of zonal convergence in between is where the convection tends to occur. The area of convergence (associated with convection) is the “active” phase and the area of divergence (associated with suppressed vertical movement) is called the “inactive” phase. 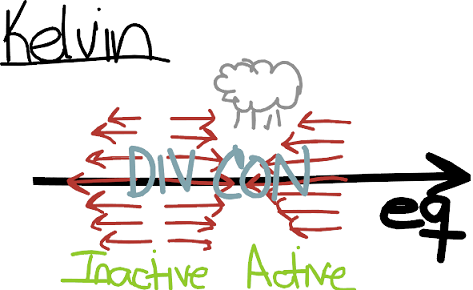 Special Properties: twin cyclones, equatorial symmetry, convection is displaced off the equator, can come in different “flavors”. Drawn below is an “n=1” ER wave, which is the most common. “n=2” ER waves can be spotted though. They are antisymmetric about the equator.

Horizontal Structure: See below. The twin cyclones are one of the key aspects, as well as the location of the convection. 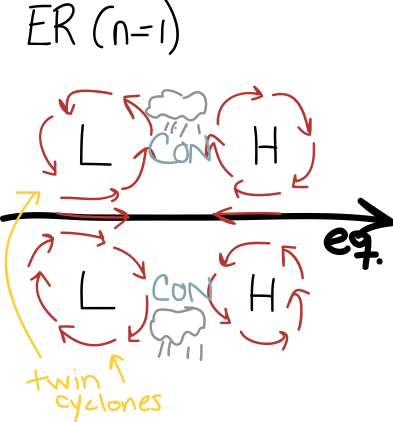 The MJO is an envelope of convection that travels eastward around the Equator in about 30-60 days. It is often considered to “begin” in the Indian ocean.

Special Properties: larger scale than either Kelvin or ER waves, large area of active convection and broad wind fields can have significant impacts on the atmosphere and ocean, no theroetical basis. We don’t know what it is or why it exists.

Propagation Characteristics: “Starts” in the Indian Ocean and travels east at roughly 5 m/s. The convective signal tends to disappear over the Eastern Pacific, but the wind signals usually stick around and speed up as it decouples from convection.

Horizontal Structure: See below. Looks a little like a hybrid of Kelvin and ER waves. This has not gone unnoticed in the literature. This is a difficult structure to draw because it varies so much as it goes around the globe. The picture below is just a rough idea. Note that the convection (active phase) is in the westerlies. The structure of the MJO is very dependent on the season and the state of ENSO. The ER-type back half disappears as the MJO moves over the warm pool. 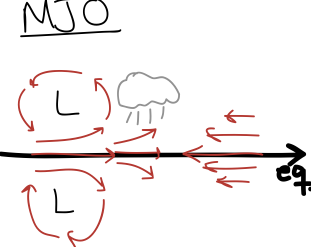 What is an atmospheric wave?

Before we can understand equatorial waves, we need to understand what an atmospheric wave is in the first place. At its core, an atmospheric wave is an oscillation in some atmospheric field(s). Most meteorologists are used to seeing Rossby waves in the midlatitudes which show up really well on isobaric geopotential height maps. These Rossby waves are oscillating patterns in the pressure (and therefore geopotential height) fields which propagate around the globe.

Amplitude: the amplitude of a wave is the amount that a wave deviates from its base state.

Wavelength: the wavelength of a wave in the atmosphere is the horizontal or vertical extent of the wave, measured from ridge-to-ridge or trough-to-trough.

Frequency: the frequency of a wave is the number of times a wave oscillates in a given amount of time. Frequency and wavelength are inversely related (for a given phase speed) – longer wavelengths are associated with higher frequencies and vice-versa.

Period: The period of wave is the amount of time it takes to complete one cycle. It is the recipirocal of frequency, so low frequency waves have long periods and vice-versa.

Fourier decomposition is one of the best techniques to separate wave types in the atmosphere. Every well-behaved (math term, we don’t need to worry about it so much) pattern can be separated entirely into a combination of sine/cosine waves with different properties. In meteorology we usually decompose atmospheric flows into waves that have separate wavenumbers and frequencies. This is called filtering. An important property of fourier decomposition is that when the sines and cosines are added back together, the original field is re-created, exactly as it was.

The take home point behind filtering is that it allows us to extract the parts of a field, such as OLR, that have the same wavenumber and frequency properties as a particular type of wave. This allows us to focus only on the relevant parts of the field.

EOF analysis is very complicated because it is full of caveats and subtleties which can make it difficult to interpret. Below is a list of some of them.

The RMM index was created by Matt Wheeler and Harry Hendon (Bureau of Meteorology, Australia) in a paper from 2004. They use EOF analysis to track the MJO on a simple circular diagram.

This is a popular method of tracking the MJO because it is easy to visualize and simple to make. However, since we do not know what the MJO actually is, we need to be careful to interpret the RMM index simply as a convenient method of tracking the MJO. It does not necessarily represent the true structure of the MJO, and often it is confused by other equatorial waves.